The best circular walk in the North York Moors

We successfully completed the Inn Way again in July 2021 and blogged it here!


We decided to do this walk during the last week of April hoping for Spring weather.  In fact we had rain, snow and blizzards as the weather gradually deteriorated over the course of the week. It didn't matter, it was a great walk and we enjoyed it very much.

We arrived in Helmsley on Sunday night and after dining at The Feathers stayed for bed and breakfast at Carlton Lodge, which was first class.  Our hotels and luggage were organised by Brigantes and everything ran like clockwork.  Luggage waiting on our arrival and first class accommodation.

After a good breakfast we were ready to hit the trail by 9.30am and walked out of Helmsley on the A170, crossing the bridge over the River Rye and coming to our first Inn Way sign immediately after the bridge. The weather was cool but fair and this and the last day were to be the only dry days of the walk.


The first section of the walk was a peaceful stretch alongside the River Rye.  Eventually we came to an arched bridge which took us over the water and past a fish farm. 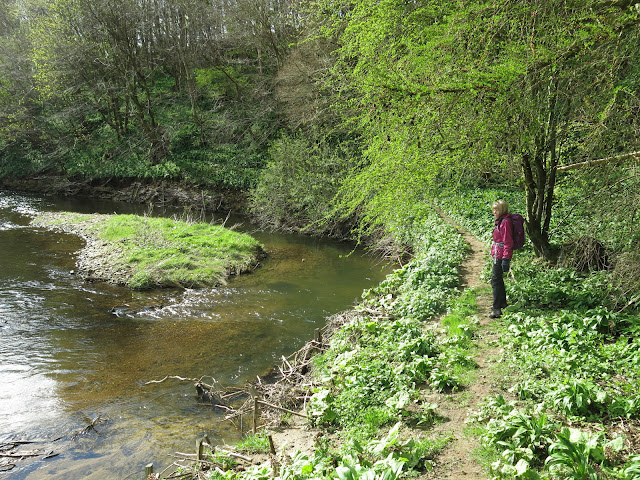 Shortly after the fish farm we passed under a railway bridge and walked through fields to join the road to Harome.  We walked along this for a while leaving it by a bridge over the River Riccal. Crossing two fields brought us to the pretty village of Harome.  Carole posed on the little wooden bridge where three years ago she slipped on wet wood and cracked her ribs. 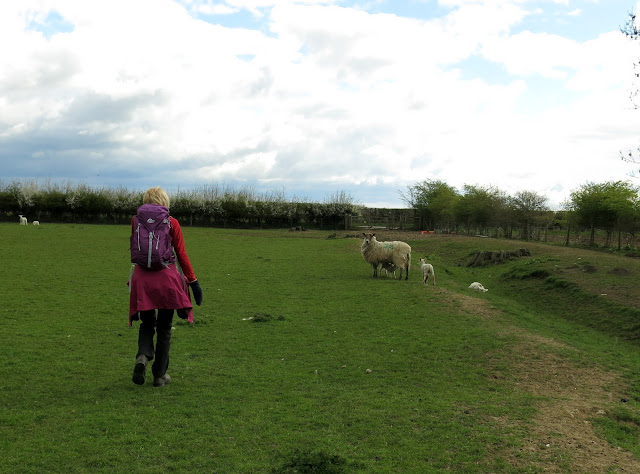 We noticed that The Pheasant Inn had a sign saying Morning Coffee, so we popped in and had coffee and cream scones.  We both agreed this was a good way to start the trek!

We left The Pheasant and Harome following the sign for 'Wombleton, Nunnington', before turning left into Back Lane next to a thatched cottage.

More fields and stiles followed before we arrived in Wombleton where we turned left at the pub, walked by a sports field and continued through more fields to reach the road at Welburn. 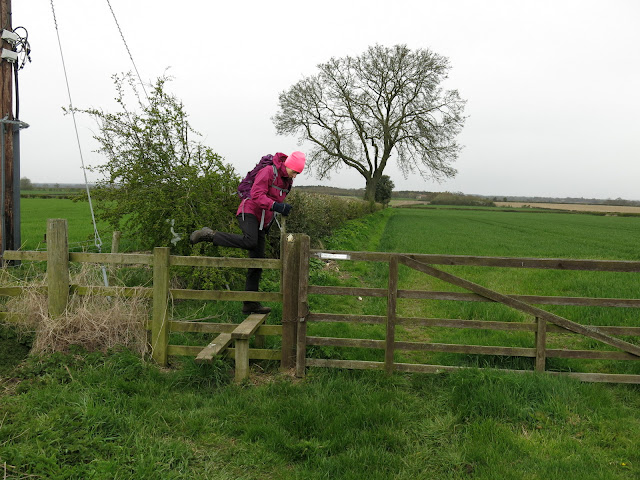 We reached St Gregory's Minster, which has been in this place since the 7th century.  Our Inn Way book explained  that monks from Lindisfarne lived here until the church was attacked by Vikings in the 9th and 10th centuries.  The church was unlocked and we enjoyed looking round.  There is a Saxon sundial above the door which has the world's longest complete Saxon inscription. 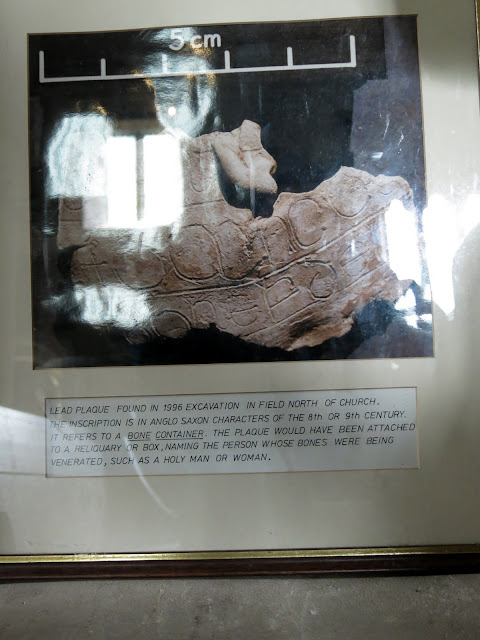 There was no-one at the church so we sat at a sheltered memorial bench against the wall and enjoyed a coffee from our flask.  As we left the church warden arrived and passed the time with us, wanting to know whether we were walking to Hutton-le-Hole via road or field. 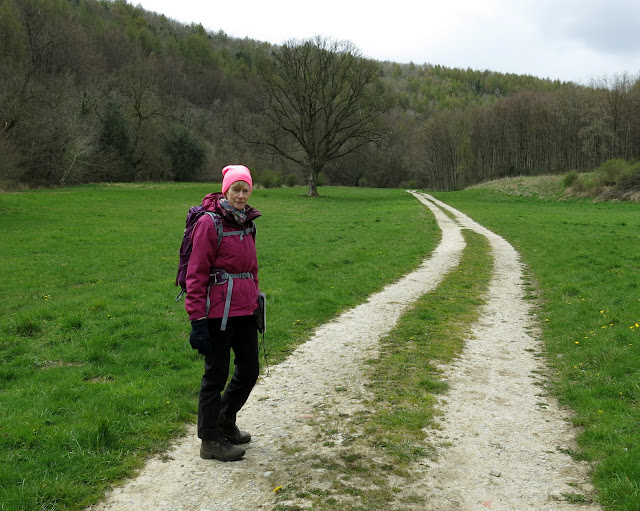 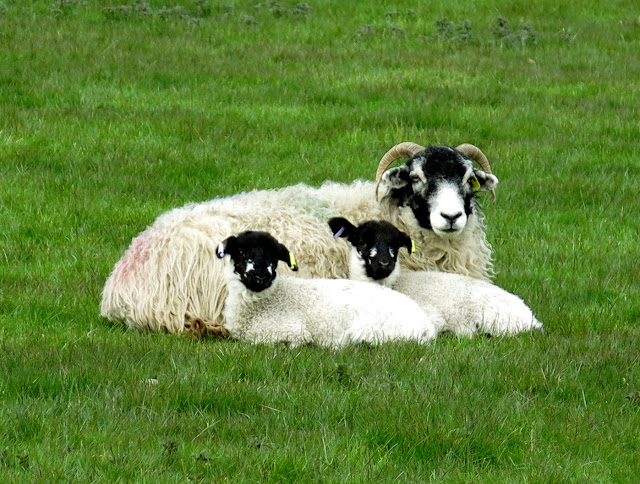 One of today's highlights was seeing lambs frolicking.  We laughed when we saw one run so fast its back legs overtook it and it turned a complete somersault as it ran, hardly pausing.

We stopped and chatted for a while with two hikers from York, resting on a bench outside St Aidans.

Just after St Aidans Church in Gillamoor, where the road turned sharply to the left, we came to 'Surprise View' looking out over Farndale and Douthwaite Dale.  A lovely view which has moved someone to add a plaque with the words of John Keble. 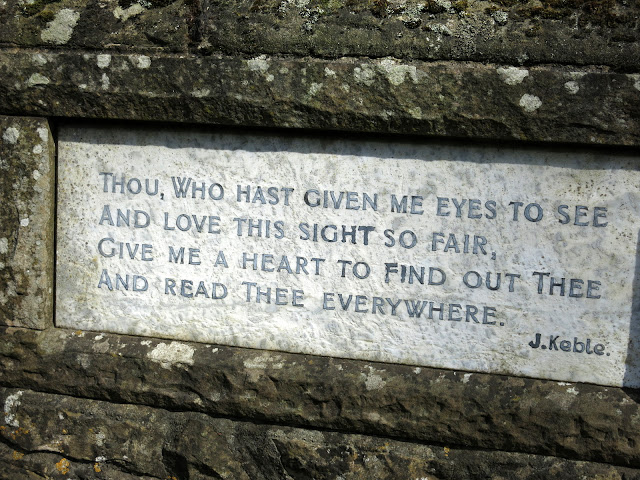 We followed the road past Surprise View to the bottom of the hill where we turned right onto a stony track which led down to an old mill which we skirted round before crossing several fields and stiles.  We were making height now and soon reached a green track through dead bracken, before joining an enclosed path that meandered down to Hutton-le-Hole, where we found our accommodation for the night at The Barn. 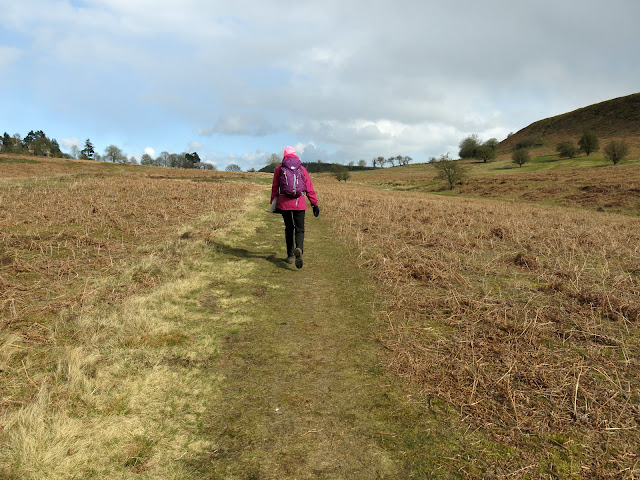 We made ourselves known to our host who welcomed us with a fresh cafetiere of coffee.  After a welcome shower and change of clothes we enjoyed a good meal at The Crown, just a few yards from our accommodation.

We heard the wind against the windows and opening the curtains saw that it was snowing, although none had laid.  Cars passing by had a layer of snow on them and at breakfast we were told Rosedale had a good covering.

After a lovely breakfast at the Barn we set off kitted out in wet weather gear and indeed it snowed on and off until 2pm.  We were lucky to have the wind to our side or rear and only walked into it for short stretches. 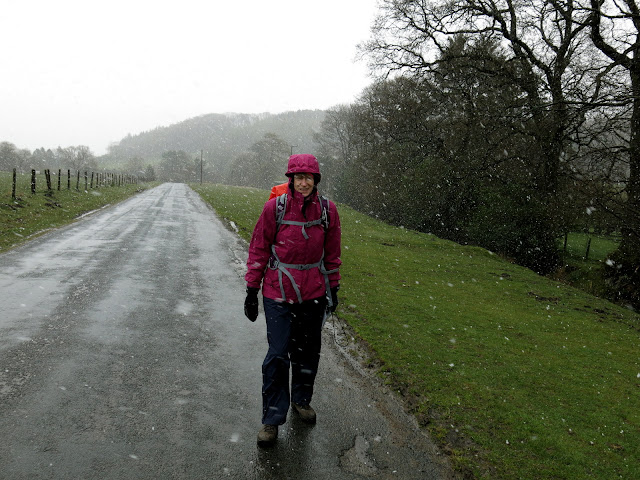 We left Hutton-le-Hole along the track to the side of the Folk Museum following the signs for Lastingham.  Our path led us through woods and fields until we joined the road just before walking down into Lastingham.  It was snowing heavily and we stopped to chat to the Church Warden, who had just unlocked the church, and, sheltering under his umbrella  told us what wonderful weather he had enjoyed last week in Devon.  We were glad to look around the church which was dry and warm.


We had the church to ourselves and it was nice to look around while we warmed through. We read that the church is on one of the earliest Christian sites as it was hear that St Cedd established his monastery in 654AD.  There is a stone crypt, built in the 11th century and we descended to have a look, finding it a very peaceful spot. 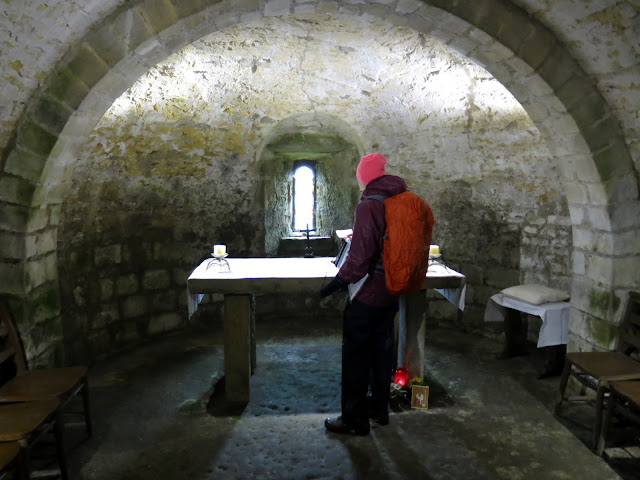 We returned to the snow and as we walked out of Lastingham we paused to admire an ancient well dedicated to St Cedd.  On leaving the village we returned to field paths before crossing a stone footbridge over Ings Beck. 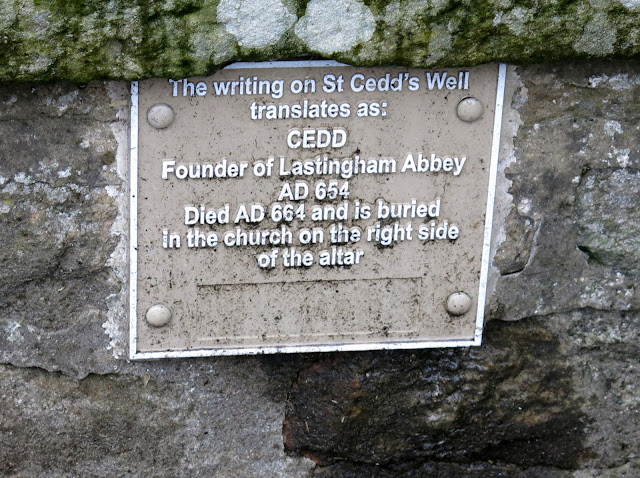 We reached Scarth Wood where there was a steep drop to the side of our track after which we returned to fields and more woodland until we came to an overgrown track known as Bull Ing Lane.
After half a mile this track took us to the road at Cropton.  The snow and sleet continued unabated and we were very pleased to see the New Inn at Cropton was open for business.  The kind barmaid sat us in front of the fire and made us fresh coffee.  We enjoyed a very pleasant half hour. 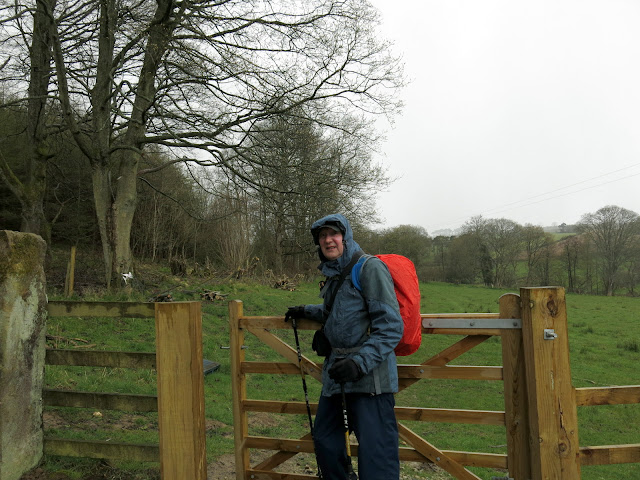 After leaving the warmth of The New Inn we had quite a long stretch on road which enabled us to make good progress.  When we returned to woodland paths we slowed as the weather had made the already wet ground very boggy and some areas had to be detoured, taking side paths through the trees.  Horses and mountain bikes had churned up the paths further.

Doing this walk in spring meant we were constantly entertained by the antics of lambs, at one point seeing two sheltering in an old bath made us laugh.

Our path took us next to the village of Newton-on-Rawcliffe and shortly after we descended Newton Dale and soon reached Levisham Station.  Today's route had more ups and downs than yesterday and the descent to the station was steep and muddy causing me to do a graceful slide at one point. 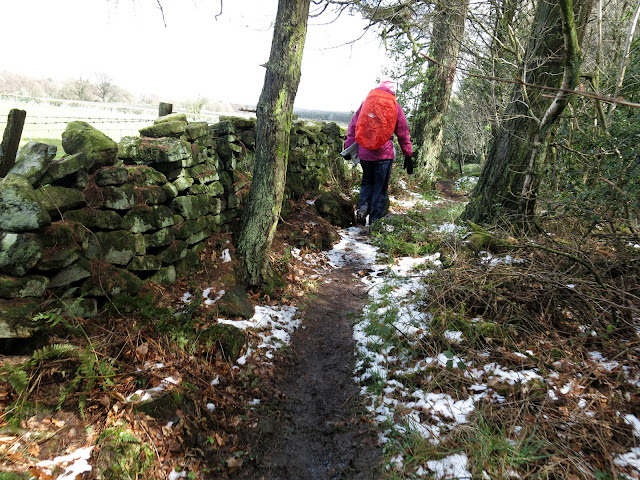 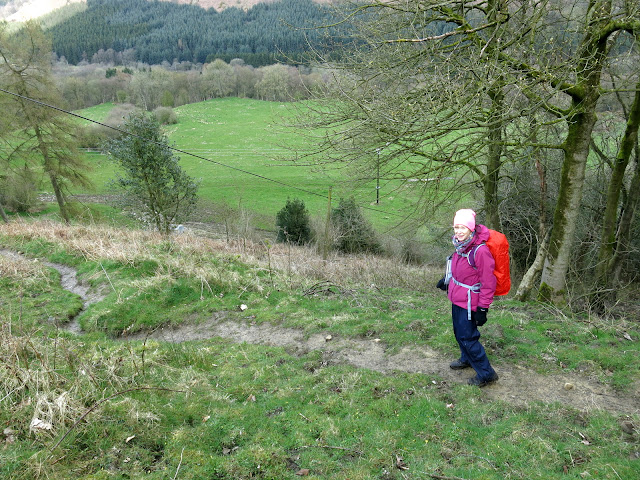 The sting in the tail of today's walk is that Levisham Station is about 1.5 miles from Levisham and it's a steep uphill climb all the way to the village.

Eventually we reached Levisham and our destination, The Horseshoe Inn, where we found a another glorious fire, too tempting to resist and we enjoyed a couple of beers before retiring to luxuriate in a hot shower. 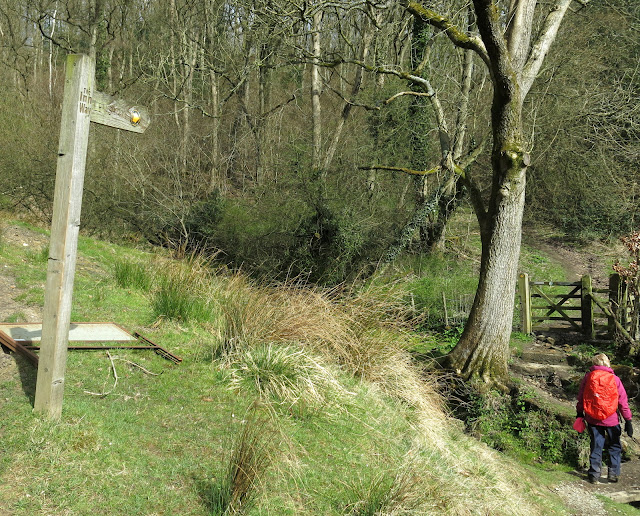 The evening meal was excellent at the Horseshoe and we reflected on a good day's walk, feeling quite pleased with ourselves for arriving in good condition, especially as far as feet were concerned.

The Inn Way to the North York Moors is one of a series of walking books written by Mark Reid. For other titles and further information click here

Click here for
Some of our other Walking Journals